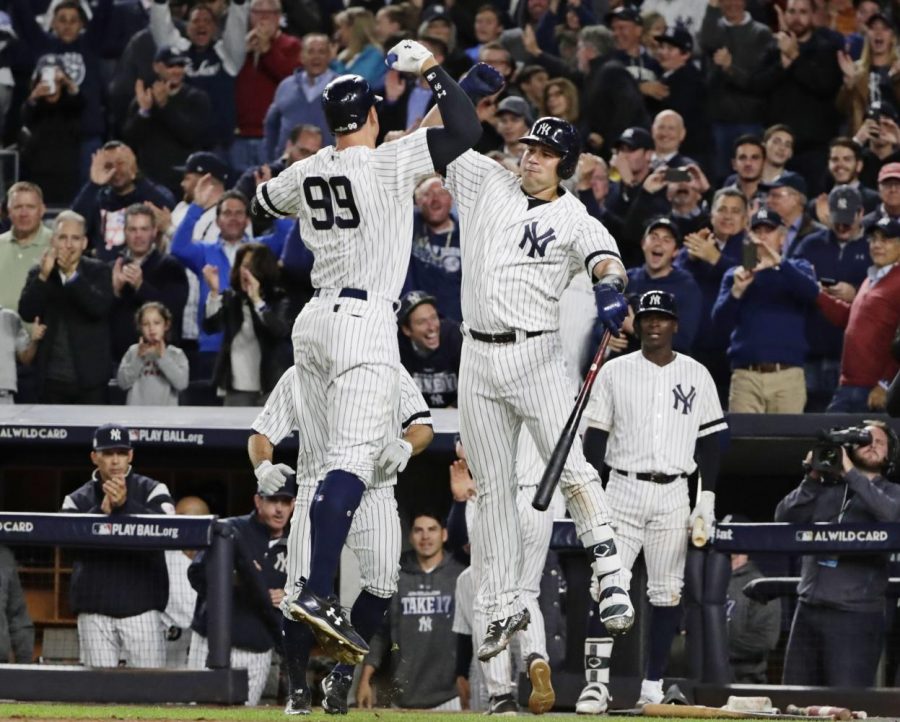 This postseason could be one of the most exciting in recent time. All of the teams have incredible talent, and three teams managed to break over 100 wins. With all the great teams, it makes it hard to pick a clear favorite to win the whole thing.

The Yankees started off the season very strong but fell down in the middle of the season. Recently they have been winning games, and Aaron Judge has been hitting home runs left and right just like before the All-Star break. The duo of Judge and Gary Sanchez have combined for 87 total home runs. The bullpen is also one that has so much depth to it. You have Chapman, Betances, Robertson, Kahnle and Green who make it tough for opponents later in the game. This was also a team that was not supposed to be in the playoffs at all. They were rebuilding and expected to be a contender in a couple of years. The Yankees, although not a favorite to win, could make a run when they are hot.

The Twins are a team that is a surprise to be making the playoffs. Last season they had 100 losses. They are the first team in history to make the playoffs following a 100-loss season. Their main source of offense this season was third baseman Miguel Sano, who is out from the wild card game for injury. A lot of their runs scored are relied on the amount of home runs they are hitting, and without Sano, that will be difficult. I think they will have a tough time versus the Yankees on Tuesday.

The Rockies have been killing it with their offense this season. They have the NL MVP candidate Nolan Arenado who had 37 HR and 130 RBI. They also have all-star centerfielder Charlie Blackmon who also totaled 37 home runs. They have a weakness, however, and that is in their starting pitching. Their starting rotation has gathered a 4.52 ERA this season. If they have a solid pitching performance on Wednesday, they could win the wild card game.

The Diamondbacks, even with a very respectable 93 wins, are still in the wild card game because of the powerhouse Dodgers that are in the same division. They have their mid-season pickup of JD Martinez who has clubbed 45 homers this year with 29 of them being in the last 61 games since he has been in Arizona. They also have the NL MVP contender Paul Goldschmidt and power hitting third baseman Jake Lamb.

The Dodgers had a spectacular season with 104 wins, the most in baseball this season. They have all around good talent at every position. September has not been good to them, however, including an 11-game losing streak. Even with that, they are still one of the strongest teams in baseball. They have one of the best pitchers in the game, Clayton Kershaw, along with the new pickup Yu Darvish. Rich Hill and Alex Wood are also featured in this strong rotation with almost no weak spots. If they get everything together and play how they played in the middle of the season, they will be a team fear by all.

The Indians are the hottest team in baseball right now and have been for the past month-and-a-half. They carried a 22-win streak to set the record for the longest in AL history. They have one of the most versatile teams in baseball with a great starting rotation led by Cy Young candidate Corey Kluber. They have all-star switch hitters Francisco Lindor and Jose Ramirez. The starting rotation is also backed up by a great bullpen featuring Andrew Miller and Cody Allen. This trio of great talent is why many people think that the Indians will have a solid chance at winning the World Series this year.

The Nationals have been cruising all year in the NL East. The offense is led by 2015 MVP Bryce Harper who is coming off an injury. It also features Anthony Rendon, Daniel Murphy and Ryan Zimmerman who had 36 home runs this season. Their starting rotation is led by Stephen Strasberg who was 15-4 this season. Their bullpen has improved as well with the deadline pickups of Brandon Kintzler and Sean Doolittle. If the Nationals are going to win a World Series, I think this year is their best shot.

The Red Sox are a young, star-studded team. They have great hitters like Andrew Benintendi, Mookie Betts and Rafael Devers. Chris Sale is the ace of the starting rotation in his debut season as a new member of the Red Sox. He has pitched amazing this season, as he was 17-8 with a 2.9 ERA. If they can outpitch their opponents they will succeed

The Astros have also been one of the best teams in the game. They have AL MVP candidate Jose Altuve who has batted an amazing .346 with 24 home runs. Carlos Correa, Alex Bregman and George Springer are the main source of offense and have done great this season. Their starting rotation also has former Cy Young winner Dallas Keuchel. The newest addition former MVP and Cy Young winner Justin Verlander has pitched amazingly since joining the team. He is 5-0 with an incredible 1.06 ERA. They also have a fantastic bullpen with closer Ken Giles, along with Chris Devenski.

The Cubs are the reigning World Series champions. The starting rotation has been good, but it has not been as dominant as it was last year. The team is mostly the same with Kris Bryant and Anthony Rizzo leading the offense. This team has the playoff experience that other teams don’t. They played seven full games in the World Series last year, so most of these guys are ready for the bright lights.

This postseason should be very exciting with lots of young talent flaring. There are some teams that are surprises to make it and some that are not, but this could be one of the greatest postseasons in MLB history.