Coginchaug Regional High School, along with many other schools in Connecticut, constantly stress the importance of a bully-free zone inside and outside of school; however, students have been contradicting this statement, saying they believe bullying is an issue at Coginchaug and should be handled differently.

After a random lunch time survey of students, it was found that underclassmen have a more negative experience with bullying. A freshman at CRHS, Shannon Moore, states bullying is an issue, especially in the younger grades.

Coginchaug’s principal Mr. Brian Falcone defines bullying as an “ongoing harassment of someone that hasn’t stopped after warnings.” He believes that at Coginchaug, habitual bullying is not a dominant issue, and most one-time, problematic behavioral incidents are handled right away. Usually it is just a one-time issue and in most circumstances, “we have a conversation… and the behavior stops,” Falcone said.

The Dean of Academic and Student Services Mrs. Beth Melillo also states that bullying refers to an ongoing harassment and agrees with Falcone that it is not a dominant issue at the school; however, she says “there is definitely unkind behavior at Coginchaug.”

Both Melillo and Falcone state that the school works very hard to keep a safe space for students and to have authoritative figures to reach out to at the school.

Senior Molly Marteka states, “I think certain people get targeted, but I don’t think it is an issue with our entire school population.”

The students who are targeted find it difficult to report, which is why having more bullying prevention methods and less intimidating ways of reporting issues is important. During the lunch time survey, students made claims of their peers making unkind social media accounts and harassing them online and in person. Several students said that they have had people repeatedly throw food and laugh at them during lunch. Underclassmen told of countless rumors and unkind social media posts that hurt people. All of these students say that they are afraid to report it because they “know [they] won‘t like the way the school handles it” and don’t want to be labeled as a “snitch”. Falcone and Melillo encourages students to come forward so that these issues can be addressed, but students, particularly underclassmen, are in agreement that dealing with these issues themselves is more comfortable. 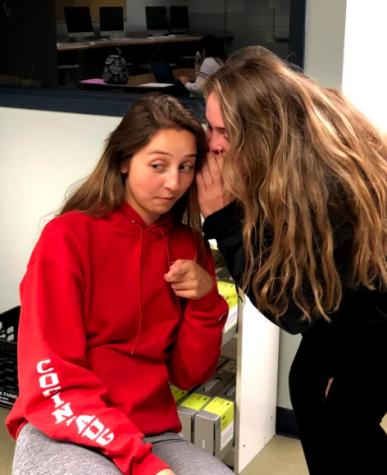 Kailey Pietrzyk, a sophomore at Coginchaug, has a bad history with bullying in the RSD 13 school district. She believes that bullying is present at Coginchaug and says that the teachers should “pay more attention” and be trained to be more aware of when bullying takes place. She claims that in middle school, her teachers knew she was upset by the way other students were treating her but didn’t take any action to address the situation or have a conversation with her about it. In the past, she also experienced students gagging at her as she walked down the hallway. She feels that Guidance is an option to provide help, but she doesn’t always feels confident enough to approach anyone herself.

Mr. Falcone has plans of creating a different way for students to reach out for help. He hopes to place a box inside of Guidance in which students can submit their problems so it can be handled confidentially.

“We’re talking about trying to find a way where students could communicate their concerns about their peers or themselves to us in a non-intimidating way,” he said.

Students such as Pietrzyk believe this is a good idea; however, it must be hidden so other kids won’t see when something is being reported.

Having a different way to report issues like Mr. Falcone stated is a step in the right direction. However, there should be more of a support system and more options when needing to reach out for help. Students say it is easier to talk about their personal issues with someone of a similar age or situation. Having a group of students in multiple grades as an outreach group could make a positive impact towards these issues. If students had classmates to look up to and go to for reporting issues or just needing someone to talk to, it could be a great help.

Other schools in Connecticut such as Newtown High School have something called “Peer Mentoring,” which is a program that builds relationships with classmates, helps new students transition, and gives students someone their own age to go to and look up to. This would make it easier for students in Coginchaug to communicate and would open up a safe space in their learning environment.