The Devil All the Time: Dark, Different, and Deliberately Disturbing 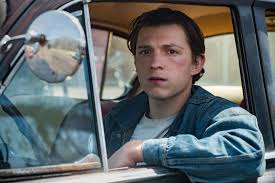 On August 13, 2020, Netflix released the trailer for its newest original film, The Devil All the Time. Members of its large, A-list cast began sharing the trailer everywhere, stirring up buzz among their adoring fans. The trailer for the mysterious new movie, starring many fan-favorite stars such as Spider-Man actor, Tom Holland, and It actor, Bill Skarsgård, left a lot about the plot up to speculation while still giving glimpses into the more shocking events, characters, and one-liners that would carry the movie. Still, there was a sinking feeling that it might be a disappointment. Maybe the hype was unjustified. Maybe, on September 16, 2020 when the movie would finally be released, it would waste a talented cast and do the source material an injustice. Thankfully, The Devil All the Time was able to bring to life a large cast of characters with a wide range of emotional depth, both sinister and sympathetic, within a well defined universe. There were few faults in this film, leaving little to be desired except a definitive message, the thing that could have taken The Devil All the Time from great to godly.

The Devil All the Time is a film adaptation of the Donald Ray Pollock novel that is focused on an extended cast of interconnected characters. The story itself spans from the 1940s to the 1960s and straddles two towns: Knockemstiff, Ohio and Coal Creek, West Virginia. At the film’s start, we meet Willard Russell, a young soldier returning from the war to his family in Coal Creek. On his way, however, he meets his future wife, Charlotte. Together, they settle in Knockemstiff and raise their son, Arvin. The rest of the movie follows Arvin, his relationship with his step sister, and his search for justice in his community. Arvin’s life is riddled with perverse, sinister, and corrupt people who contribute to the  disturbing events that plague Coal Creek and Knockemstiff.

Beyond the well-crafted cinematography and the beautiful use of practical effects—which made for perfectly uncomfortable and alarming visuals—what made this film stand out was the cast of characters and the people who brought them to life. The main motif of The Devil All the Time is the interconnectedness of the various people and their individual stories. Each of the roles in this movie is emotionally trying from the perverted, to the disturbed, to the traumatized, and their actors could not have done a better job. With brilliant performances from Tom Holland, Robert Pattinson, Bill Skarsgård, Eliza Scanlen, Riley Keough, and many others, this remarkable cast is practically unrivaled. The level of moral ambiguity in each of the characters, especially the protagonist, is insane. They each have their own deep-rooted darkness to the point that rooting for any of them feels simultaneously wrong and right.

The Devil All the Time really only suffered because its purpose is somewhat unclear. It was done amazingly for what it is, but after watching it, it is difficult to determine what its message is supposed to be. Its message could be interpreted as anything from “there is hope for the sinners and justice for the saints,” to “life sucks and then you die.” The movie itself is a pessimistic depiction of a very religious, tight-knit community and the darkness it conceals within, that much is clear, but whether that pessimism is meant to extend beyond the ending or to the greater meaning of the tragic plot is uncertain. Maybe the interpretation was intended to be up to the audience, but it does come off rather nihilistic on its own. The anticipation for an emotional or symbolic stinger that builds throughout the plot is never resolved. Not every story needs a blatantly obvious message, but an audience should at least be able to pick up on something beyond the chronology of the plot.